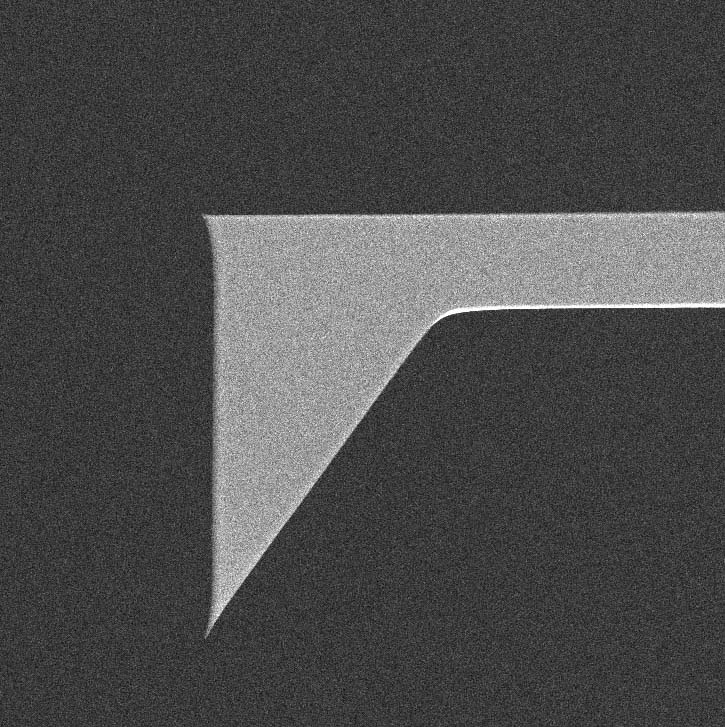 Olympus Corp. has decided to stop producing their well-known AFM probes, also known as Olympus*** Micro Cantilevers, which have been on the market for decades. Over the last few years many of the well-known Olympus*** AFM probe types and series have been discontinued. In September 2022 Olympus Corporation declared the production end for the 5 remaining types of silicon-based Olympus*** AFM probes (https://probe.olympus-global.com/en/support/discon/)

We have therefore prepared a detailed guide introducing the different possible options for alternatives.

In the following we will break down the different AFM tip shape types offered by NanoAndMore compared to the Olympus*** AFM tips shape.

Additionally, we also compare and highlight the variety of AFM probes brands offered by NanoAndMore:

from a mechanical-parameter point of view for each individual Olympus*** AFM probe type.

In order to enable an easy switch and to reduce a loss in time and frustration on the customer’s side, we are providing this information in dedicated subcategories here in this section.

There are two more points to mention before we get into comparing the different AFM tip shapes.

1. Dry-etching vs. wet-etching: Both etching methods are used to bulk micromachine silicon and to form shapes, AFM support chips, AFM cantilevers and AFM tips out of silicon wafers. Dry etching is going against and/or through silicon planes and in general yields rougher surfaces. Wet etching, on the other hand, etches along silicon crystal planes, utilizing the different etching behavior and etching speed of the differently oriented silicon planes, which in general results in smoother and more reproducible surfaces. Because almost all silicon AFM probes see some kind of oxide-sharpening during their manufacturing process, the difference in roughness is reduced to some extent, but not completely. 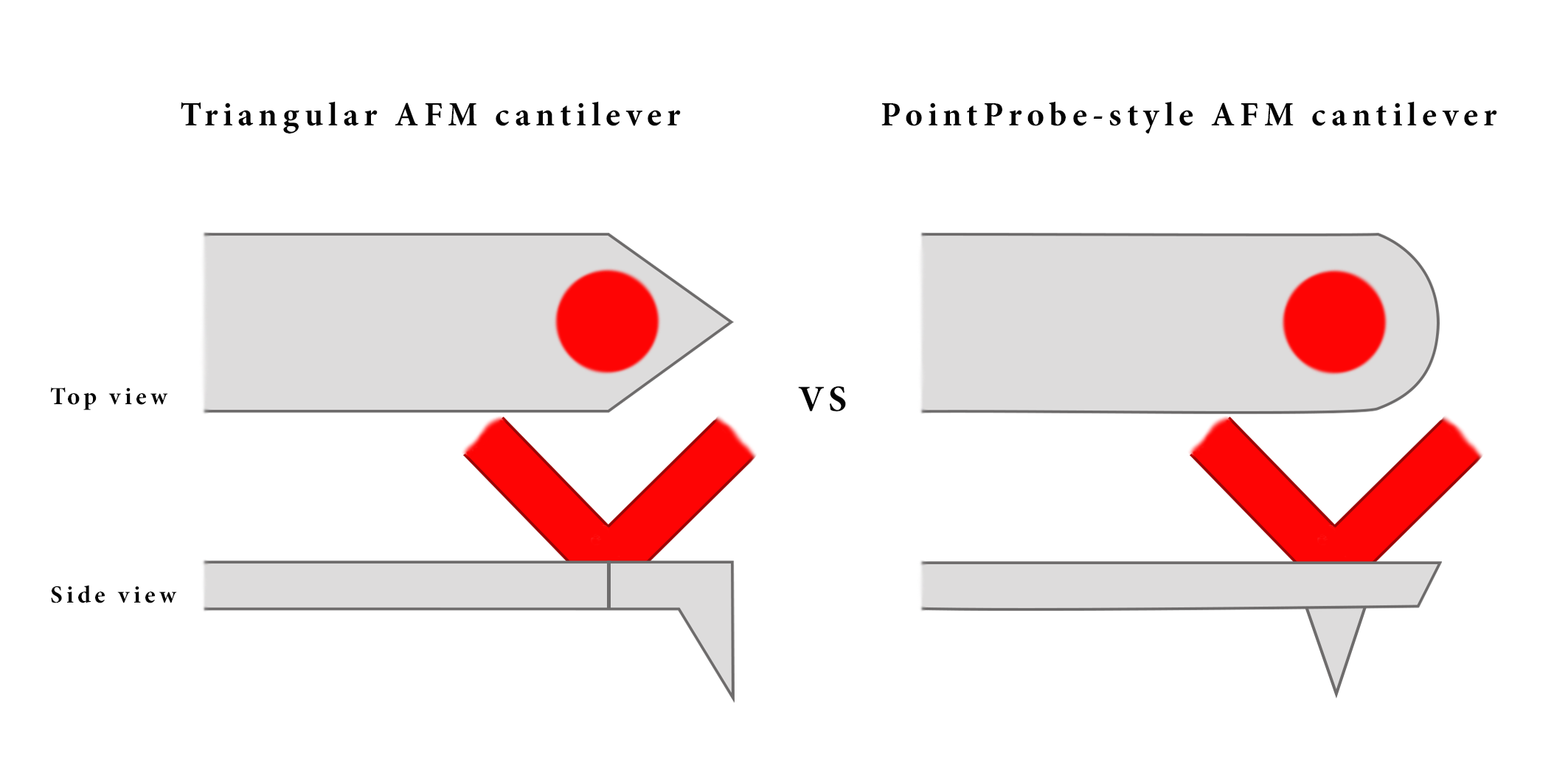 In general, the silicon-based Olympus*** AFM tip is a dry etched (around 90° sidewall) tetrahedral AFM tip at the end of the AFM cantilever. It has an AFM tip height of about 14um and an AFM tip radius of curvature of 7nm (specs taken from Olympus*** Microlever spec sheet).

OPUS™ AFM probes are made from SOI wafers and the AFM tip as well as the AFM cantilever is defined by a dry etch manufacturing step.

The AdvancedTEC™ (Advanced Tip at the End of the Cantilever) AFM Tip from NANOSENSORS™:

The AdvancedTEC™ AFM tip features a tetrahedral AFM tip that is different from the Olympus*** and OPUS™ style, because the AFM tip protrudes over the very end of the AFM cantilever. This very special feature allows precise positioning of the AFM tip onto the point of interest on the sample even once the AdvancedTec™ AFM probe is mounted onto the AFM head and tilted at 12° to 13° (see schematic below).

Since the AdvancedTEC™ AFM tip protrudes over the end of the AFM cantilever, it offers REAL TIP VISIBILITY FROM TOP and is the premium choice for all Olympus*** AFM probe users who have used Olympus*** AFM probes exactly for this specific feature of placing the AFM tip right onto the place of interest.

The Arrow AFM Tip by NanoWorld®:

The Arrow AFM tip height is 10-15µm (3.5um for the Arrow UHF AFM probe type – high speed version) and the radius of curvature is typically <10nm. The AFM tip as well as the AFM cantilever is defined by wet-etching and features a very smooth and reproducible overall AFM tip shape. The Arrow AFM probes series is produced from special monocrystalline highly doped silicon wafers.

The standard polygon-based pyramid etched silicon AFM tip is, as the names suggests, shaped like a polygon-based pyramid. Its macroscopic half cone angle is 20° to 25° when viewed along the cantilever axis, 25° to 30° when viewed from the side and virtually zero at the very end of the AFM tip. This AFM tip style is fully wet-etched and features very smooth and reproducible surfaces.

In the following we also call this polygon-based pyramid etched AFM tip shape – Pointprobe® style because the NANOSENSORS™ Pointprobe® was the first commercially offered AFM tip of this style.

Contrary to the Olympus***, OPUS™, Arrow and AdvancedTEC™ AFM tips, all polygon-based pyramid etched silicon AFM tips come with a tip setback (of about 15um) which means the AFM cantilever end is overhanging the tip position. This brings a slight disadvantage when it comes to precisely placing the AFM tip onto area of interest on the sample (please keep in mind the resolution limitation of your optical camera at the AFM setup!), however it shadows the deflection laser from the sample and helps to avoid the laser influencing the sample while performing the measurement in some applications and measuring modes.

Furthermore, for laser reflective coatings along with other back side coatings that should not reach and contaminate the AFM tip, the shadowing effect of the AFM cantilever of the Pointprobe® style AFM tip (tip setback) is essential during coating the back side of the AFM cantilever, because it prevents metal clusters and particles from depositing onto the AFM tip. This latter effect could result in an increased radius of curvature and/or other unwanted effects, and defects during the AFM measurement. An AFM tip at the end of the AFM cantilever at 90° or even more complicated - a protruding AFM tip end flank - can make the coating of only the back side of Olympus***, OPUS™ and AdvancedTEC™ AFM cantilevers very difficult (not so for Arrow AFM tips as they offer the inclined, wet etched silicon AFM tip end).

The polygon-based pyramid etched silicon AFM tip is 10-15μm high (there are also tall versions available of up to 50um on the NANOSENSORS™ Special Developments List) and comes with radii starting with 2nm for super high-resolution imaging to standard radii of <7nm, <8nm, <10nm, … and radii of up to 200nm for nanomechanical measurements depending on the brand and/or AFM probe type, and model in question. Pointprobe® style AFM probes are produced on special monocrystalline highly doped silicon wafers.

Some brands (MikroMasch®, BudgetSenors®) offer a rotated PointPobe style AFM tip shape (meaning the Pointprobe® style AFM tip is rotated by 180° on the AFM cantilever) as standard and others (NANOSENSORS™, NanoWorld®) offer this as an option for some types and models.

In general, the Pointprobe® style AFM tip is by far the most versatile, AFM tip style worldwide. It comes in a wide variety of different AFM tip modifications, shapes and coatings – far too many to list here! Please contact us if you are looking for something out of the ordinary! We most likely have it available or have done it in the past and could have it reproduced on demand.