ScanAsyst® is an off resonance Atomic Force Microscopy (AFM) scan mode for mainly topography imaging with automatic image parameter control and adjustment. Off resonance AFM mode means that the AFM probes and AFM cantilevers used while acquiring the AFM image don’t operate on or close to their Eigenfrequency – therefore ScanAsyst® as well as Peak Force Tapping® are called an off-resonance AFM operation mode.

With this Scan Asyst® technology the users don’t need to perform the optimization of the different AFM scan parameters such as AFM setpoint, AFM feedback gains, and AFM scan rate while at the same time still be able to obtain a good AFM imaging result. The ScanAyst® mode in AFM is especially useful, but not limited for, AFM beginners, non-experienced AFM users and AFM´ers not regularly acquiring images with an Atomic Force Microscope as adjusting all the different scan parameters for a very good scan result in AFM imaging requires lots of AFM experience and sometimes, depending on the AFM model and AFM mode in use, month and years of AFM practice.

Especially designed algorithms programmed by Bruker Corp. into the AFM control unit monitor the AFM image acquisition and AFM scan results continuously in order to adjust in real time the above-mentioned AFM scan parameters such as AFM setpoint, AFM feedback gains and AFM scan rate. Therefore ScanAsyst® provides potentially an easier way for especially AFM beginners and unexperienced users to obtain good imaging results by allowing them to only deal with and concentrate on the desired AFM scan area of interest and envisioned AFM scan size for many of the common AFM samples measured in ambient (air) or liquid (fluid) scan environments.

The so-called Peak Force tapping® AFM technique acquires very rapidly force curves at each single pixel measured during the AFM image acquisition. Peak Force Tapping® modulates the AFM cantilever at a low to high single digit kHz frequency, depending on the AFM model and sub measurement Peak force tapping® mode in use. These AFM force curve signals, the resulting peak force of each individual measured force of each individual pixel, are then fed back into the AFM control system as imaging feedback signal. Peak Force Tapping® therefore offers a potentially more direct path to force control contrary to AFM done in standard Tapping Mode where a more sophisticated interaction of AFM setpoint and other AFM scan parameters describe the resulting AFM imaging force.

As mentioned above for a smooth AFM ScanAsyst® or Peak Force Tapping® operation and successful AFM imaging acquisition the AFM probes and AFM cantilevers selected for these modes have to fulfil certain mechanical criteria regarding force constant k and frequency fo but especially in and for ScanAsyst® mode also in terms of damping the AFM cantilevers in the right manner once it got modulated by the AFM system.

The difficulty that arises from this is due to the fact that ScanAsyst® requires relatively soft AFM cantilevers (~0.5 N/m +/-0.3 N/m) that have some kind of minimum frequency requirement (should not be lower than ~50 kHz) but have to be at the same time relatively large to offer enough reflectivity for the laser beam and the beam deflection detection system.

Furthermore, and especially for ScanAsyst® AFM mode operation the damping of the AFM probes and AFM cantilevers play an important role to ensure a smooth and successful AFM measurement and AFM image acquisition. The so-called signature ScanAsyst® heartbeat curve is visualized by plotting force versus time - the resulting graph reassembles a graph similar to a heartbeat curve – therefore this specific graph is called heartbeat.

E.g. NANOSENSORS™ has named their specific ScanAsyst® AFM probes HeartBeat Cantilevers (HBC, NANOSENSORS™ qp-HBC) as namesake and to also highlight the importance of this specific graph: 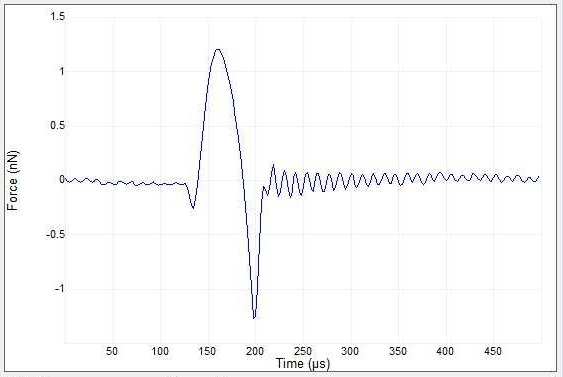 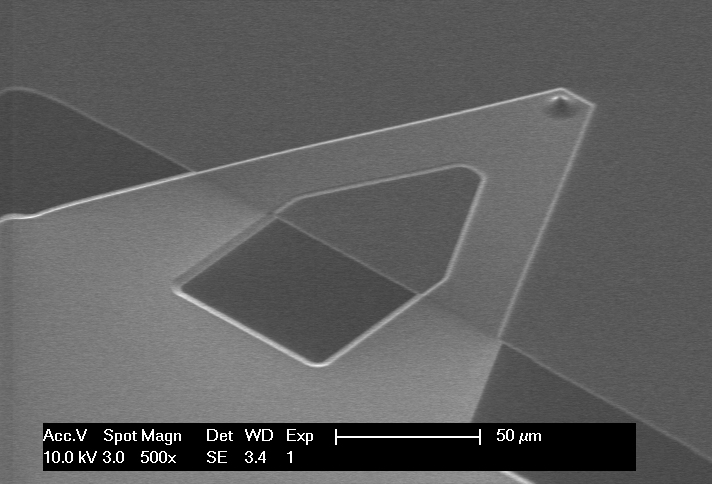 This specific shape of that above-described heartbeat graph is a result of the snap-in-contact of the AFM tip while the AFM probe gets moved closer to the sample and then while the AFM probe gets moved away from the sample by the AFM system the snap-out-of-contact of the AFM tip and the forces and damping that the cantilever sees shortly after that last snap-out event.
Therefore, the right amount of damping plays an eminent role in the immediate and timely tapering of the amplitude after the AFM tip snaped-out-of-contact and until the next modulation cycle through the AFM system and ScanAsyst® algorithm gets triggered.

With their flagship technology uniqprobe qp, NANOSENSORS™ are already utilizing such partial reflex coating techniques for some of their super soft AFM probe models. In the future this special technique certainly will be applied more widely and to more softer AFM cantilever types.

All AFM probes offered by us for this ScanAsyst® mode  are tested for a smooth and successful AFM operation.

* PeakForce Tapping® and ScanAsyst® are registered trademarks of Bruker Corporation.

6 results matching your criteria
best of the best